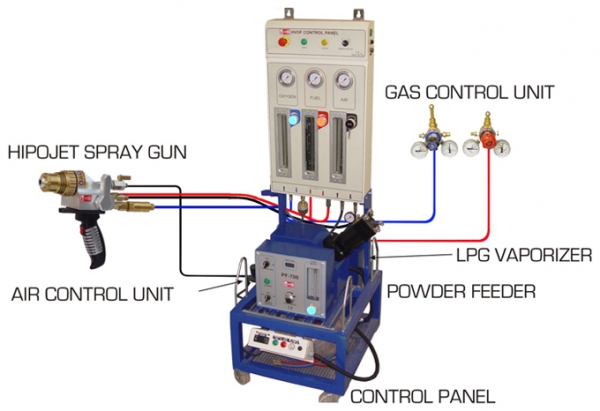 MEC - Metallizing Equipment Company Ltd , is one of the worldwide leading company in the field of metal deposition by spraying technologies .

WHAT IS THERMAL SPRAY - INTRODUCTION

THERMAL SPRAYING - What it Was and What it Has Become:

In addition to using chemical means to plasticize the input consumables electrical currents are also used. Typically, electrical energy is used to create a heat source into which powder, and more recently wires, are fed, melted/plasticized and conveyed onto the surface to be coated. Major, commercially employed electrical methods, used to construct coatings include non-transferred arc plasma, RF plasma, and wire arc.

It has long been recognized that fluids may be broken up into very fine particles by a stream of high velocity gas emanating from a nozzle. Early experiments using this atomizing approach appear to have been directed at producing metallic powders rather than coatings. It was left to Schoop to appreciate the possibility that a stream of metallic particles, formed from a molten source, could produce a coating. Myth has it that Schoop developed the concept when playing "soldiers" with his son and observing the deformation of lead pellets being fired from a toy cannon against a brick wall. Whatever the rationale, it can be stated that the pioneer work of Schoop resulted in the discovery and development of metal spraying and subsequently the "Thermal Spray Process".

Powder flame spraying is probably the simplest of all the spray processes to describe - feed a powder through the center bore of a nozzle where it melts and is carried by the escaping oxy-fuel gases to the work piece. Unfortunately, this approach yields coatings high in oxides and with void contents approaching 20 volume percent (v/o). However, coating quality can be improved by feeding air to the nozzle through a small jet, which reduces the pressure in a chamber behind the nozzle. This chamber is connected to the powder feed hopper. In this way a gentle stream of gas is sucked into the gun and carries powder with it.

In about 1912 Schoop developed the first device for spraying metal wires. The apparatus consisted of a nozzle in which a fuel, probably acetylene or hydrogen, was mixed with oxygen and burned at the nozzle's face. A stream of compressed air surrounding the flame atomized and propelled the liquefied metal. Process continuation depended on feeding the wire at a controllable rate so it melted and was propelled in a continuous stream. Schoop approached this problem by using a turbine to actuated gears and drive rolls that pulled the wire into the nozzle. This apparatus appeared to him to be similar to a pistol or gun, and because of this, he and we, refer to thermal spray devices as "guns" or "pistols" and never "torches". Schoop' concepts of spraying solid metals has given rise to the thermal spray industry and for this reason it is sometimes referred to as the "Schoop Process". Regardless, the wire flame spray gun has not radically changed since the days of Schoop. While there have been changes in nozzle and air cap design, replacement of the air turbine with an electrical motor and even the use of barrel valves the basic principal, however, remains the same "push or pull a wire into a flame, melt and atomize it and deposit the molten droplets to form an adherent coating".

The spraying of ceramic rods dates back to the early 1950s when a demand arose for heat resistant refractory coatings. Plasma had not come into its own and flame sprayed powder coatings, due to their porous nature, lacked the integrity and protection required. The solution was rather simple - Coors Ceramic and Norton developed ceramic rods, referred to as Rokide, while the Metallizing Engineering Company (Mogul), modified a wire gun to spray rods. What differentiated the guns were the drive rolls. A wire gun had serrated steel rolls to grip and feed the wire while the Rokide gun employed "V" slotted fiber rolls that pinched the rods and fed them forward. The principle of operation in either gun is similar - the nozzle's flame is concentric to the wire or rod in order to maximize uniform heating. A coaxial sheath of compressed gas around the flame atomizes the molten material and accelerates it to the workpiece. Particle velocities in both the wire and rod process are approximately the same - 185 m/sec (600 ft/sec) while coating densities have been measured at approximately 95 v/o.